Ticket price $40.00/person – Contact Brigitte Clayton for tickets barrysplace@telus.net – or phone 250-545-0883
Tickets must purchased by the 19th of October.

Teams are asked to bring one or two small door prizes. 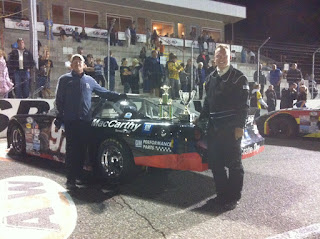 ARCA regular Logan jewel finishes second in WCSS points final race and wins the WCSS points championship. The first northern based car to do so In five years of WCSS racing. Congratulation to the Jewel team.
Posted by kendall at 02:42

IT'S ON - WCSS Points Final September 22 at Motoplex

$4000 purse split evenly
1 new tire and 3 previously run and marked Goodyear tires.
Come on out and enjoy one last run on the BIG TRACK.
Always a good time, all sportsman racers are welcome
Posted by kendall at 17:18

Congratultions to 2012 Rookie of the year Jeff Cameron. A hard fought battle between the three rookie contenders all season came down to an eight point lead. Jeff battled back from a blown engine, tough luck and even an engine fire to earn the top rookie spot. Thanks to the Red Bluff Pub in Quesnel for their many years of support in the ARCA OK Tire Sportsman Series. 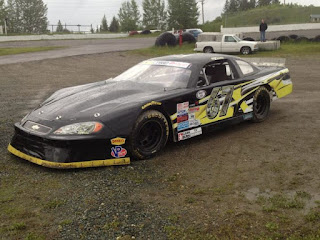 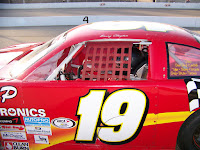 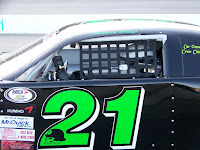 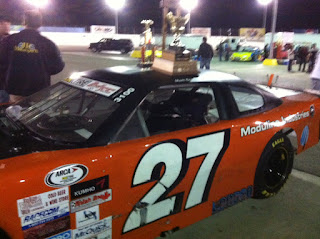 For the third time in four years Mark Berriau has captured the ARCA OK Tire Series Points Championship. Driver, car, and sponsors all factor in on Mark's championship win, but in this case the credit may go to a committed crew that refuses to give up. Often championships can be traced back to a defining moment in the season. Marks' may have been in Agassiz when he was involved in an accident that could have easily ended his championship hopes, but a hard working crew put the car together during a red flag delay, allowing Mark to not only finish and collect important points, but race back to second place in the main event. It takes an incredible effort to put together the puzzle pieces of a championship. Congratulations to Mark and his crew on his well-earned championship. 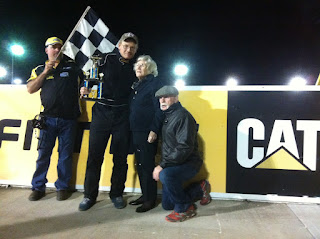 ARCA OK Tire Series sportsman racers came with their A game for the points championship night at Motoplex Speedway. A night sponsored by Russ Anderson Junior, in the memory of his father, a true race fan. The points were tight going in with Mark Berriau leading Ian Graham by only 16 points. The battle for rookie of the year was even tighter between Jeff Cameron and Barry Clayton separated by only three points. Qualifying was tighter than ever with the majority of the field being separated by half a second. Visiting past champion Korbin Thomas set the fast time at an 18.619, ten one hundredths off of Ian Graham’s track record.
Heat races were fast and competitive as Ryley Seibert took home the checkered in the B heat. The A heat had some fireworks as Trevor Adelman and Sarah Cornett-Ching battled hard for the lead. The two drivers were nose to tail for the first 4 laps until a coming together left Adelman Spinning down the backstretch, the entire field was able to miss him and he continued. Mark Berriau inherited the lead and was able to fend off a hard charging Matt Stephenson and Dave Olson for the win. 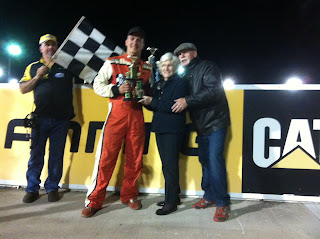 A great crowd of fans were treated to the customary 3 wide salute. Bringing the field to green was Jeff Cameron on the pole and Bobby Mear on the outside pole. Into turn one the 7 of Mear passed the 67 of Cameron and took the lead. Right away the 5 car of Williams slid into third with the 47 of Adelman holding second. Williams made the bold move and took the lead on lap 6 and began to run from the field. The pack is tight and the motivated Matt Stephenson hangs it all out and races into third. The 5T of Korbin Thomas, along with the quick qualifiers are racing hard in a tight pack. Lap thirteen, Stephenson into second with sights set on the 5 car of Williams. Looking for every point, the 18 of Graham is working through. Berriau sits in fourth, behind the 18. The 99 of Cornett-Ching and the 12 of Loudoun have been battling hard for lap after lap. WCSS feature winner and contender for the 1000.00 bonus for the win, Logan Jewel is racing the 71 of Dave Olson. Traffic is tight and the passing is tough. Back in the field the 09 of Ryley Seibert is working traffic and passing cars. Into lapped traffic the 18 of Graham passes the 1 and takes second. Graham is fast and is trying to reel in the 5 of Williams. The field is stretching out and the mid pack is hoping for a caution. Their hopes come true with a spinning car on the backstretch bringing out the only caution of the night. Also needing a caution are the 22 of Babcock into the pits for adjustments, the 71 of Olson, and the smoking car of Trevor Adelman, all in for service. The yellow resets the field and the 5 of Williams gives up the hard earned track position. 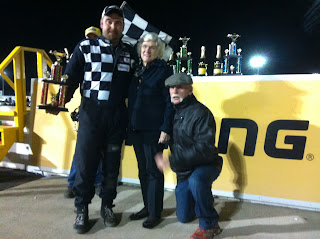 Back to green, the race is on. Trying to pace the 100 laps and gamble on another caution, Graham goes for it and passes the 5 of Williams, Bringing the 1 car of Stephenson with him. Graham’s got it all on the line. The 92 of Jewel follows the 5T of Thomas and the 27 of Berriau Battling hard. Side by side the battle wages on, with Jewel hoping to be the beneficiary of any contact. No luck as the 5T completes the pass. Lapped cars are factoring in and the lead group is working through. Graham’s car seems to be backing up, and on lap 63 it’s Stephenson into the top spot. Thomas consumes the 18 as does Berriau. Thomas and Berriau now focus on catching the 1 of Stephenson. Through the field the 09 is into sixth, passing better than half the field. The 92 of Jewel is into 4th passing the 5 of Williams. Laps are winding up and Thomas and Berriau are wishing for a caution to gain track position. No luck with a yellow as the ARCA racers are keeping it fast and clean. 93 laps of green and a fast car have Stephenson in the number one spot. Thomas second, Berriau third, good enough to put his third championship in the bank. Jewel fourth in the race and third in the championship chase, and Seibert into fifth with a last lap pass. Sixth Williams in the 5 car, Seventh a disappointed Ian Graham, still second in the championship running. Eighth local favorite Sarah Cornett-Ching. Ninth Bobby Mear, preserving his fourth spot in the points. Top finishing rookie, Cass Walker with a top ten. The Ford of Dan Ursel 11th, Dave Olson twelfth, 13th is WCSS racer Mike Soppit. Rookie champ Jeff Cameron 14th, New to driving this year and rookie contender Barry Clayton finishes up a great season in 15th. The “Junkyard Dog” Kalvin Loudoun with a misfiring engine 16th. The 22 Ford of Chris Babcock hangs on for 17th, A rookie to ARCA, but no rookie to Motoplex, Super Dave Howarth finishes 18th, and an oil leak has Trevor Adelman the first car out at lap 46 in 19th.
Many thanks to all of our sponsors, volunteers, fans and racers for a great season of ARCA OK Tire Series racing. It’s the energy and commitment from all involved that allows is to put on a great show.
Posted by kendall at 16:35 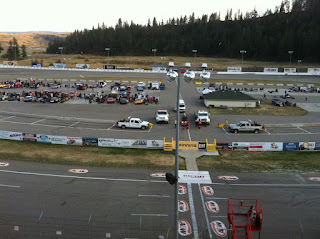 Hello Sportsman racers,
Getting ready for the ARCA OK Tire sportsman Series championship night at Motoplex speedway in Vernon. Thanks to Russ Anderson Junior for sponsoring the event in the memory of his father, Russell L. Anderson, a long time BC race fan. Russ has added a 1000.00 Bonus to any of the WCSS racers who competed on the 25th of August, if they win the main event on Saturday night. The points race is close throughout the field and we are looking forward to a great night of racing. As always, we invite any and all sportsman racers to come out and enjoy the fun. Good luck to everyone.
See you at the track,
Kendall Thomas