After a disappointing rainout in Williams lake two weeks earlier, the advance testing teams had high hopes for good weather and a successful race 1 in Prince George. The weather would just about cooperate. 23 of the best sportsman cars made the trip to the most northern race of the series.

Ian Graham set the stage with the fastest time in qualifying at a 16.665, with Trevor Adelman a very close 16.993. The entire 23 car field was separated by just over a second, and the majority of the group was within 3 tenths. A very tight field.

Heats were split into three groups with Kyle Day taking the C heat, Dave Olson the B, and Wes Mader the A heat. A great drive by all three.

After a qualifying spin left the 71 of Dave Olson scrambling, he just made the invert and started on The pole. Chris Babcock in the 22 Ford was outside pole. The green flag set the field to racing on the 3/8 symmetrical oval. The green flag run lasted for 8 laps until the 89 and 22 came together and both cars started at the back of the restart. After 20 laps of green, 71 of Dave Olson was handling the lead well, the 92 of Logan Jewel, the 19 of Korbin Thomas, the 1 of Matt Stephenson, and the 47 of Trevor Adelman were all working through traffic and setting sights on the leader. Laps 20 brought out a caution with the 2 tangling with another car and the 19 of Thomas caught in the middle. The 2 and 19 to the back. Olson has a great restart, perfectly executed all night long, jewel Makes a run on the high side, Olson unflappable, keeps the lead. The 19 of Thomas and the 86 of Tom Berrow are working from the back fast. The race is on as Stephenson pressures the 71, Jewel in the mix and Trevor Adelman showing great speed. Bruce Bently holds the 5th spot until caution slows the field.

The caution now brings on a series of cautions, as they say, cautions breed cautions. Finally at lap 67 what looks like a clean restart turns into turn three mayhem as many cars are caught in “the big one”. Stephenson and Jewel make contact in the front and the field stacks up. The track goes red as cars come into the pits for repairs. The 18 of Ian graham has contacted the wall hard, along with Tom Berrow, the 22 Ford of Babcock is damaged on each corner, the 14 of Bently, having a great run is spent in the infield. Many cars in and out for service as the cleanup continues.  Involved in the wreck, 57 of Les Hein, 99 of Sarah Cornett-Ching, 73 of Kyle Day, 31 Steve Hancock, 5 of Bob Williams. Reluctant benefactors of the wreck are the cars lucky enough to make it through.With the cars lined up, ready to finish the last 20, the rain starts to fall and the race is called. The 19 of Thomas ends up in second. In the first tour race of his racing career, and first podium, is Cameron Graham, brother of front running Ian Graham. The 23 of Derek Christiansen is rewarded for a solid a patient run with 4th position, Wes Mader makes the Top 5, and rookie Jarret Bonn finishes 6th. A crazy night of racing with a very unexpected finish.

Rookie Cameron Graham now leads the ASA Advance Testing points, the first time in history a rookie has lead the points after the first night. Race 2 in Agassiz is coming up July Fifth, and will be another exciting night racing, with the best drivers and cars in BC competing for the checkered flag 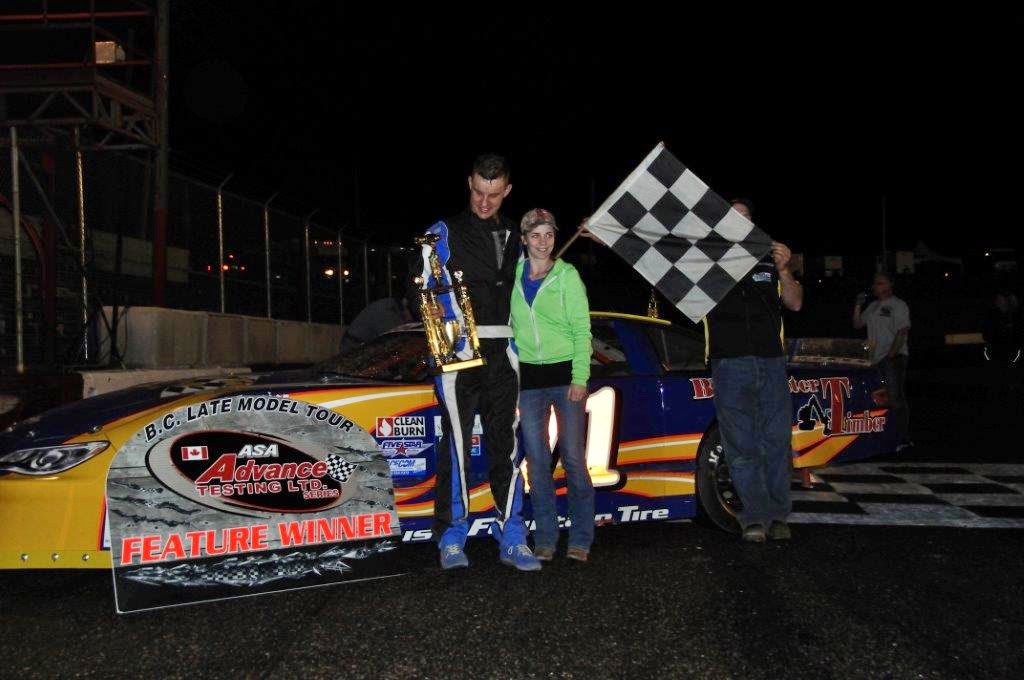 After careful review and analysis we have posted the official race results at:

5 car one lap down - lap 73 under yellow
2 car 2 laps down lap 34 and lap 46
lap 35 19 car spun, stayed ahead of leader, on lead lap. started at back.
results were as displayed by computer
Only manual change was 6 car added lap for lucky dog, as when on no count cautions, the computer does not add the lap.
The race was finished as it would have been restarted to complete the race.
* note - rookies start a the back for 3 races and are awarded passing points from the starting position.
* complete lap chart can be viewed on mylaps results top right menu bar.
Posted by kendall at 09:06

After a good hard battle with Logan Jewel, and Kalvin Loudoun, Joe Cornett-Ching came away as the Winner of the Lordco 100.
Posted by kendall at 20:41 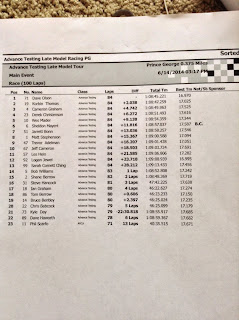 Here are the unofficial results of the race in pg. We will be doing a final review tomorrow night and will be posting points and full results to Mylaps. The race was lined up and finished as it would have been brought to the next green flag if the rain had not finished the night.
Posted by kendall at 22:20

Gearing up for PG - Track Times

Thanks again to Sandman Inns for their continued support of the series.  The sandman has 2 Hotels in Prince George. If you are booking rooms for the race weekend, please use confirmation number – 128049 for the Signature Series Suites. Rooms start at 127.00 a night or if you are booking the Sandman Hotel just off of the highway, please use confirmation number  307904.
Posted by kendall at 23:05

Many thanks to the members and executive of Thunder Mountain Speedway for working hard to have the Advance Testing Late Model Tour back to the Lake town after an unfortunate rain out both days. The club stepped up and added 2500 to the purse on the August 23 date, as a thank you to all of the committed racers for hanging in there trying hard both days to put on the show. The total purse for that weekend will be 15000 dollars, the highest one day purse in the history of the series. The August date is the memorial race, and will be a great time to remember fallen racers, and put on a show to remember for the fans.Looking forward to a great weekend of racing
Posted by kendall at 08:33