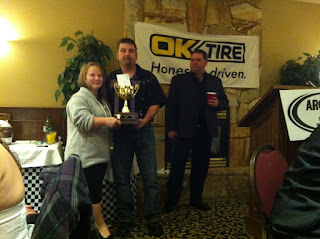 A great banquet was had by all last weekend. The Okanangan street stock association,  the West Coast Sportsman Series and the ARCA OK Tire Sportsman Series came together in Vernon for a great night of awards presentations and good fun bring the 2012 racing season to an official close. The WCSS crowned the 5th champion of the series with Logan Jewel becoming the first Northern based car to win the big prize. Kalvin Loudoun and Sarah Cornett-Ching picked up second and third respectively. Sportsman of the year was Jeff Cameron, and Barry Clayton collected most improved driver. Cassandra Walker collected up the Rookie of the year trophy. Matt Stephenson gained the most positions in every race to take home the hard charger trophy. Joe Cornett-Ching of ANJ Automotive took home the sponsor of the year trophy for his support of the series. Dale Beisik collected the hard luck trophy. 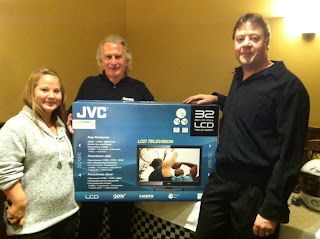