Motoplex Speedway was the location for the ASA OK Tire Series by Advance Testing championship night. 21 cars out to do battle on the D shaped ½ mile. All were perfectly prepared and ready to do battle.
A clear blue sky and warm temperatures were the norm as a true Okanagan September evening unfolded. 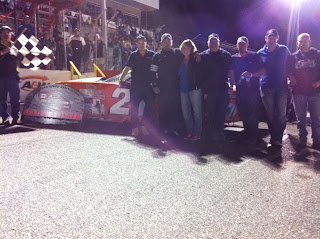 Fast in practice were the usual cast of characters, Ian graham, Korbin Thomas, Matt Stephenson, Mark Berriau, and Bob Williams. Thomas with a fair points lead would pretty much clinch the 2013 Championship with a solid qualifying effort, and sure enough, Thomas sets fast time with an 18.828.

The heats are run and Dave Olson wins the B heat. Mark Berriau Runs hard and wins the A. Matt Stephenson’s nigh ends with a mechanical problem in the A heat.


The 125 lap main has Mark Berriau move to the back due to possible mechanical issues. The 47 of Trevor Adelman takes the field to the green with the 7 of Bob Mear on the high side, The 99 of Sarah Cornett-Ching, past ASA rookie of the year, is back for this race and is racing hard. He 92 of Logan Jewel and The 5 of Bob Williams are already moving forward. On lap ten, Williams moves into the lead, and starts to move out. The 92 of jewel is hot on his heels. The 19 of Thomas is moving through a 14 car invert and racing hard. Lap 25 brings the first caution, the 12 car of Kalvin Loudoun has had some help and is spun in three, Berriau just about misses him, but rips the front off of the 12. Berriau ok, Loudoun to the pits.  Back to green with a tight battle all of the way through. 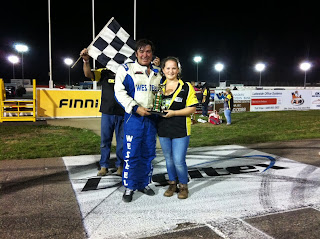 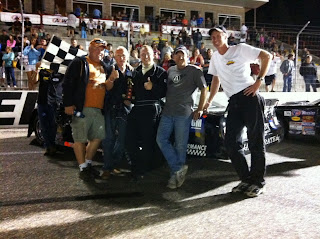 The rookie of the year is up and down as the 89 leads the 57, and then places are traded. It’s going to come down to a position or two. Yellow again on lap 59, the 47 and the 18 tangled up in turn one, Ian graham tries to re-fire, but gets lapped, dashing hopes for a second place championship position. Back to green the 19 and the 92 are hot on the 5 car of Williams. Thomas on the high side giving Williams fits as the 92 lays in wait. Williams holds him off and continues. Yellow flag for a spin, and back to green on 98. The 27 has made his way through the field and is a high side restart on the 5 car. The flag flies and the two race hard down the front stretch, they touch and both slide into turn one, Berriau comes out of turn two leading, Williams is right there. Thomas wants in on the battle, but the 92 of Jewel is putting the pressure on big time. Yellow again and the field resets. 27 has a good restart and the five falls in line. The 92 makes the pass on the 19 for the last podium. The 2 of Wes Mader is putting together a great run and is in fifth. The laps run out and Mark Berriau wins the OK Tire 125. Williams Second, Jewel third. Thomas wins the championship in fourth, Wes mader with a well-earned top 5, Sarah Cornett-Ching with a great run in sixth. Sheldon Mayert solid in 7th, Ian Graham makes up two laps via lucky dog, and finishes 8th, Jeff Cameron in 9th, Scott Morgan 10th. Dave Olson 11th, Les Hein 12th, Bruce Bently 13th, Dave Haworth 14th, Bob Mear 15th, Trevor Adelman 16th Kyle day 17th, Kalvin Loudoun 18th, Joe Cornett-Ching 19th.  Russ Janson is unable to run due to a mechanical problem in practice