Caution filled race helps thomas hold on for the win 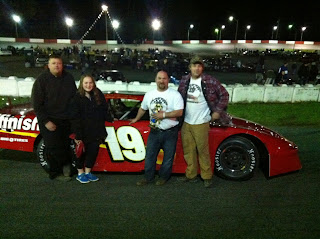 A good night of racing was had by all at the Agassiz speedway last night. The first late model race of the season brought out 13 cars, many advance testing late model tour series cars preparing for the first tour event of the season in Williams lake two weeks from now.

Kendall thomas was able to take the early lead and hold on for the win. Regular caution flags kept the fast qualifier ian graham and Asa series champ Korbin thomas fighting traffic and only in the closing laps were they able to clear and make time.
Posted by kendall at 07:46