The ASA late model tour headed to Quesnel last weekend for race three of series. Twenty one late
model cars showed up to try their luck in winning the coveted gold pan trophy. As in the past races this year, mother nature was involved with a downpour before practice. Thankfully the track dried quickly and the cars were able to practice. Qualifying was interrupted by a brief shower. The last car to qualify, Ian Graham was able to knock Korbin Thomas off of the top spot with a 15.087, less than a tenth faster. The entire field was close with the majority of the cars being with three tenths.

The heat races were set and the 22 Ford of Chris Babcock won the C heat. The winner of the B heat was points contender Dave Olson in the 71 car. Local racer Bruce Bentley took home the gold pan Trophy for his top performance in the A heat.

The 100 lap feature sponsored by Prism Towing had Dan Ursel in the 74 on the inside, and Bob Williams on the high side, leading the field to green. Williams was able to hold the high groove and make the pass on lap 1 and take the lead. The field was double file and racing hard. The points contenders working through a 14 car invert, has the 1car of Matt Stephenson in second, Wes Mader in the 10 third,  Logan Jewel in fourth, and Trevor Adelman rounding out the top five at lap 15. Caution flew as the 89 car spins out of turn four, collecting the 86 of Tom Berrow with a hard impact to the front stretch wall, and Ian Graham into the inside fence. Both Berrow and Graham are done for the night. On the restart, it is the 5 car, Stephenson and Mader in the top three. A couple of cautions reset the field, and the tight racing continues. At lap 50, Rookies Derek Christenson, Cam Graham, Jarrett Bonn, and Shane Berrow are racing into the top ten. Patience is key, and the rookies are moving forward. At lap 66, Points leader Korbin Thomas in the 19 has moved into second with past champion Matt Stephenson in third. Let the chess game begin. Olson, Mader, and Cornett- Ching continue to race hard. A late race caution on lap 87 bunches the field. The restart has the 10 of Mader spinning the tires, and nearly hitting the inside wall, he saves it, but a the 73 of Kyle Day, 74 of Dan Ursel are collected and the race is red flagged for heavy damage on the driver's side of the 73. The driver is ok 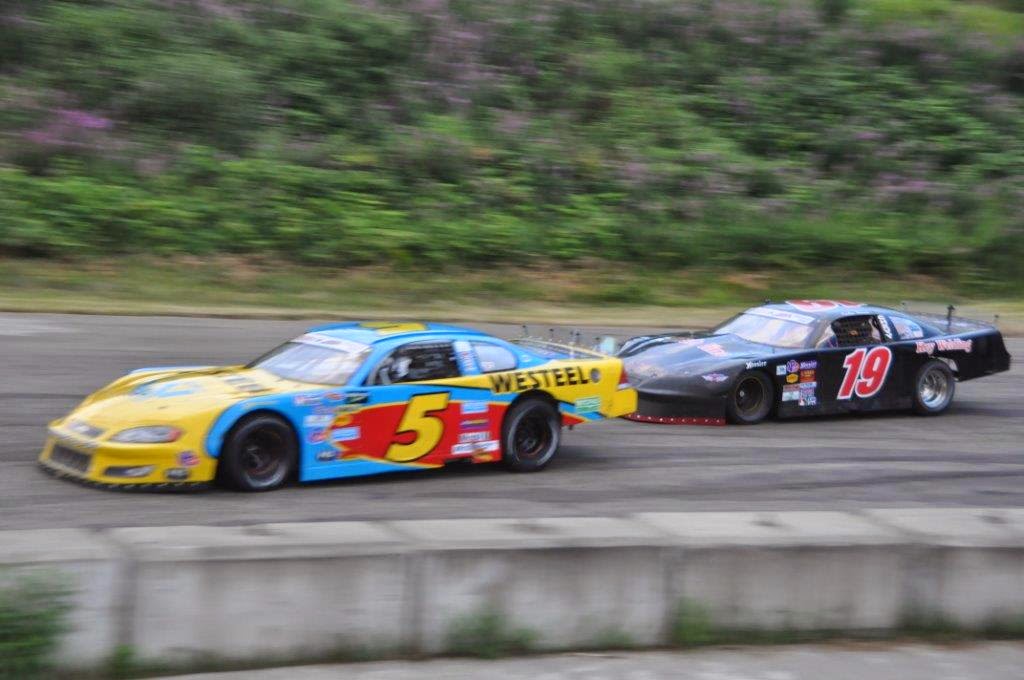 and the race is lined up for the final laps.  A single file restart and Thomas looks high on the five, Stephenson looks for second but Thomas drops back inline. The racing is hard and fast through the field. With 6 laps to go, the 41 or Trevor Adelman blows a motor and is able to get off of the track and the race continues. The white flag flies and Thomas is challenging on the high side. The race finishes up with Williams the winner, Thomas 2nd, Stephenson 3rd, Olson 4th, Jewel 5th, Cam Graham 6th, Steve Hancock 7th, Derek Christenson 8th, Shane Berrow 9th, Cornett-Ching 10th, Mader 11th, Dan Ursel 12, Mayert 13, Bonn 14, Adelman 15, Day 16, Bentley 17, Haworth 18, Babcock 19, Graham 20, Berrow, 21.

Next event is the ever exciting Agassiz Speedway, come on out the see Race 4, August 9th.