The 2014 ASA Advance testing awards banquet is wrapped up and put to bed. Thanks again to Agassiz Speedway for inviting the ASA series to be a part of their banquet. Thanks also to Pat, Barb, Andy and the rest of the Agassiz crew for putting on a great event. Congratulations to all Agassiz Speedway award winners, many well-earned awards and achievements within the local racing community.

The ASA Advance testing banquet began with Mike Ernst, master of ceremonies extending a great thanks to the founder of Advance Testing, John Ross, for his commitment to the ASA series and to racing in BC. John has been a loyal supporter for years and his support is greatly appreciated.  The top ten points recipients were honored with a custom built banner for their achievements. The 71 car of Dave Olson earned both the best appearing car and best appearing crew awards, the car was bright and well kept all season, and the crew was looking good as always. 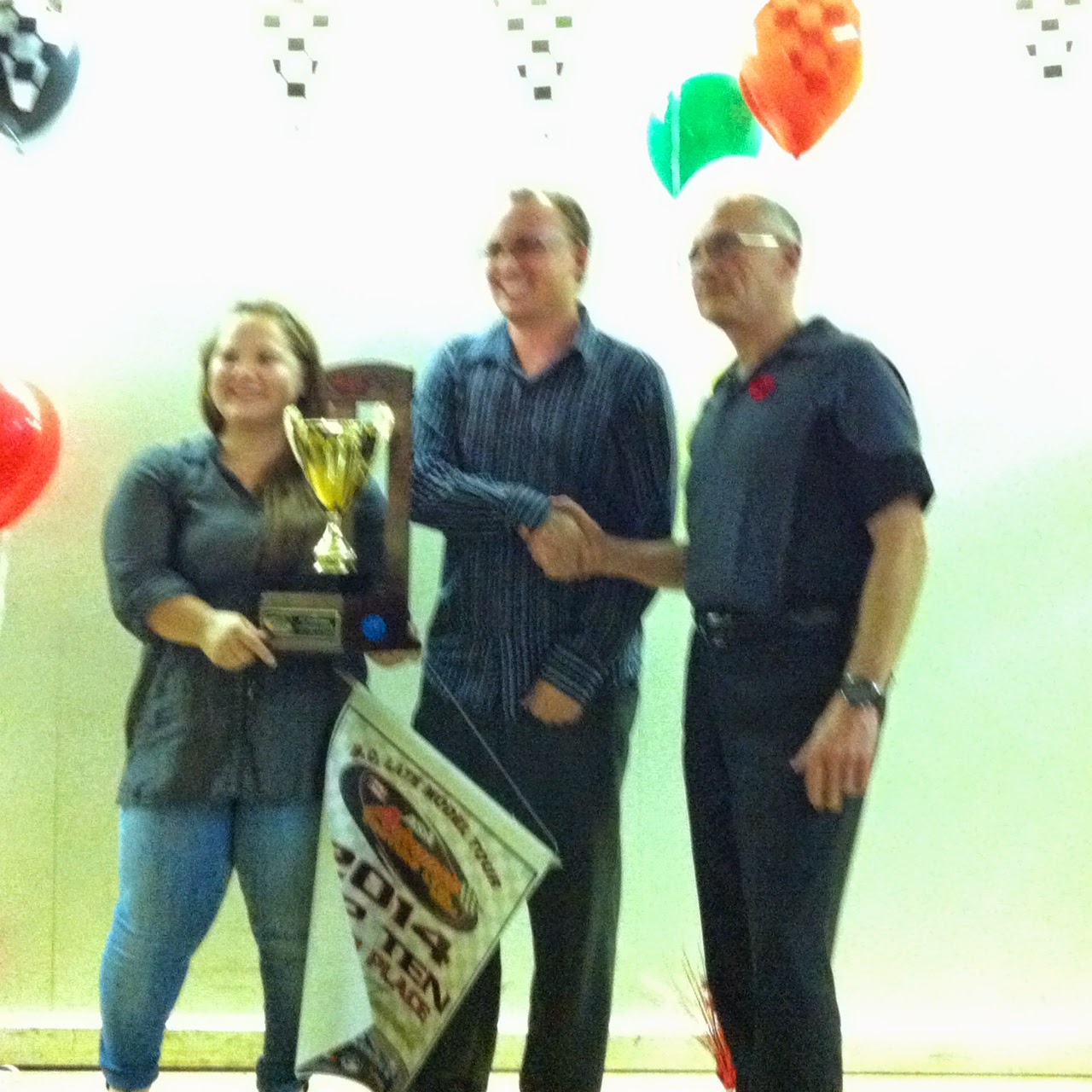 The number 10 car of Wes Mader earned the most improved driver award with a great top three overall performance. The most sportsmanlike award, voted on by the drivers, was awarded to Joe Cornett-Ching. Joe is a great competitor and a gentleman on and off the track. The hard luck trophy was reluctantly received by Ian Graham. A tough start to his season being involved in “The Big Wreck”, then two other big wrecks. Ian returned strong each night and went on to be the only racer to win two events in the 2014 season.

The sponsor of the year award was given to Ashely Furniture coming on line with not only a contingent sponsorship, but 2 Lazyboy recliners given to race winners in Quesnel and Williams Lake. The recliners have become one of the MUST WIN trophies for the series.  Dave Key was awarded the Most Committed Crewmember award. An emotional award commemorating the hard work of crew members to not only perform at a high level on their own equipment, but selflessly help others. The presidents’ award was given to Brigitte Clayton for her hard work over many years with the series in the timing tower. 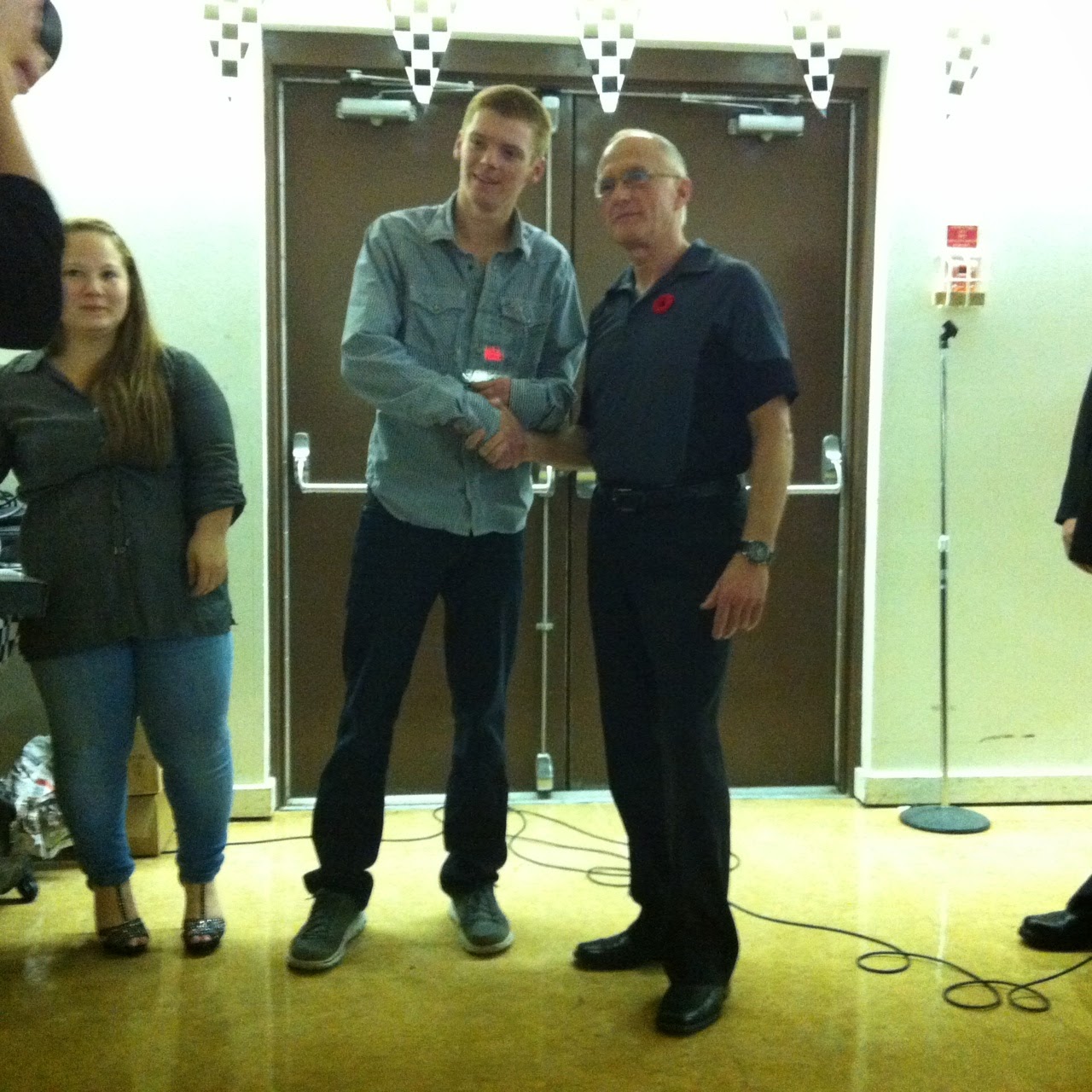 Thanks also to our hard working and talented officials. Without their hard work and dedication the series wouldn’t be what it is today.

Cameron Graham was honored with the Rookie of the Year Award. Cam raced hard, stayed out of trouble, and was the first rookie to finish in the top three in the history of the series. Cam shared the third place position in a tie with Wes Mader.

Racing incredibly hard all season, and putting together his best season yet was runner up Logan Jewel. A hard charging racer who will be fighting for the top spot next year.

The WESCAR CUP was awarded to Korbin Thomas for top points. A perfectly prepared car and a driver who is cool under pressure hoisted the cup for the 5th time in the history of the series.

Thanks to everyone involved in the series. Tracks, fans, racers, sponsors, and officials. This is an awesome touring series travelling to some of the greatest tracks in Western Canada. Without the support of everyone, we wouldn’t be able to enjoy this great sport. Looking forward to a great 2015 season.
Posted by kendall at 11:19