The first ARCA OK Tire Sportsman series race is set to go this Saturday, May 12. Many of the best sportsman racers in BC will be at Motoplex speedway in Vernon to challenge each other and battle for the top spot on the podium. The winner of the race puts him or herself in a great position for a sportsman series championship run. The series has produced many top flight racers and teams and each championship has come down to a last race challenge. The series has had young guns, and seasoned regulars in position to wear the coveted ARCA championship jacket. This year three rookies will race for the rookie of the year title. Cass Walker, Jeff Cameron, and Barry Clayton will proudly wear the yellow stripe. Will this race set the stage for one of the youngest racers in BC racing history to win a touring championship or will a seasoned veteran put all the pieces of the puzzle together.  This race will have everyone on the edge of their seats until the last lap. Will last year’s champ Mark Berriau dominate in Vernon. Matt Stephenson and Sarah Cornett-Ching both collected wins in WCSS events at Motoplex. The ever fast Kalvin Loudoun, the “junkyard dog”, can taste a win. Ryley Seibert and Ian Graham battled many times for podium finishes last year and both contended for the championship. Chris Babcock, Logan Jewel, Trevor Adelman and Dave Olson will travel from the north to battle for the top spot. Bobby Mear, Ray Campbell, and Don Nickel have been tuning and testing for their chance. Dan Ursel and James Ward have the Lordco duo prepared and ready.  Could a visiting car stand on the top of the podium? Rumour is that NCATS racer Trevor Seibert will be out and Dave Hemrich will also make the trip. Come on out and be a part of the excitement this weekend at the Motoplex. For racer and fan information, check in regularly at www.arcasportsman.ca. 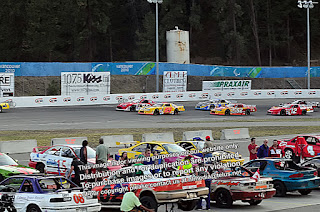 Picture from next level media. To see many more pictures from the 2011 ARCA OK Tire Series, click on each race menu bar, and scroll down.