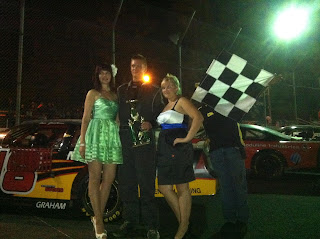 Race five of six took place this weekend at Agassiz Speedway. The Merton GM Performance Parts 100 brought out some of the fastest sportsman cars in BC. The fore shadow of how the race would play out may have come in practice with the 22 car of Chris Babcock spinning out and the 47 of Trevor Adelman making hard contact with him. Both cars sustained heavy damage, but hard work and commitment from both teams had the cars patched back together for qualifying. Just when we thought the prerace situation was under control, the 67 of Jeff Cameron caught fire. A broken fuel fitting had the safety crew on their toes. Some new parts and hard work also had Jeff back in the action for qualifying. Ian Graham, local favorite was focused on taking the track record from fellow racer Ryley Seibert, but a hot slick track left him a few hundredths off of the record. Logan Jewel set second fast time with Mark Berriau third. 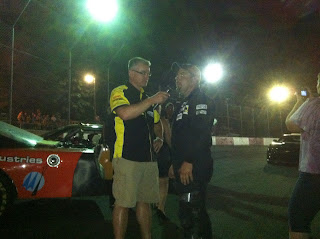 Heat Races continued the bent and twisted theme of the day with the 7 car of Bobby Mear making a three wide pass out of turn two and connecting with the 67 of Jeff Cameron into three. The right front suspension was heavily damaged and the 7 crew was hard at work to repair the car for the main. Chris Babcock was able to pass Cass Walker for the lead and hold on for the win. The A heat went all green with Matt Stephenson claiming the checkered flag. 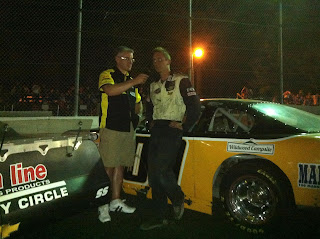 With all cars back together and ready for the main, Brent Morris brought the field to green with Sarah Cornet-Ching on the outside pole. A missed shift by one of the front cars had the field re-grouping  for another restart. Morris held the lead and began to move away from the field. On lap 6 the 47 of Trevor Adelman hit the backstretch wall after something in the rear suspension failed. He was done for the night. Restart on lap 12 has the 27 and 5 cars pushing towards the front, the five car of Thomas suddenly slowed on the front stretch and headed to the pits for a new right front tire. The green continued with Morris strong out front and Berriau biding his time. The red flag flew into turn one as the lead cars began to work through lapped traffic. Cars were spinning and crashing into the corner. The leader Brent Morris is spun sideways and tangled up . The 92 of Logan Jewel hammered the the front end of the 25 hard. Both cars sustained heavy damage and were unable to continue. In the fray, Cornett-Ching slowed high to avoid the mess and the 27 of Berriau crashed under the 99, lifting the car into the air stopping with the rear tire of Cornet-Ching sitting on the window of the 27. Safety, fire crew and tow truck attended, but everyone is ok. 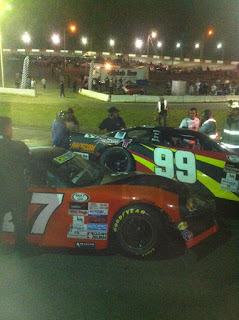 The 99 is lifted off of the 27 and the championship contender limped to the pits for service. With the contents of three rads and assorted liquids on the track, a big track cleanup ensued. The extended red allowed the crew to patch up Berriau’s car, and he returned to the track. Missing the wreck was second place points contender, Ian Graham, Matt Stephenson,  the 09 of Ryley Seibert, and local champion Paul Turond. Back to green the 1 of Stephenson gives Graham fits with a strong restart on the high side. Graham fended him off. A couple laps later, in a cloud of smoke, something in the engine of the 1 car failed as a possible podium finish is dashed. Another double file restart, Graham and Turond are first and second. Jeff Cameron spins bringing out another caution and resets the field. Berriau is in the mix now and clearly a contender in the fenderless 27 car. Back to green, 18, 09, 27 and the x of Turond fourth, Cass Walker rounded out the top five. The mid pack continued to battle. A spinning 2 car brings out the caution on lap 82. With just over ten to go, Graham has the field covered, Berriau in Second with Seibert looking for every chance to gain a spot. A tight battle with the 27 and 09 continues for lap after lap. Turond in fourth, waiting to capitalize. The checkered waved with Ian Graham winning a perfectly driven race. Berriau with the come back of the night in second. Seibert third, the X of Turond in fourth. Bobby Mear fifth, Ursel into sixth, Cass Walker top finishing rookie in seventh. Barry Clayton eighth,  Korbin Thomas in ninth, and Cornett-Ching surviving the night in tenth. 11th John Ross, 12th Jeff Cameron, 22 Chris Babcock 13th, Stephenson 14th, Morris 15th, Jewel 16th, and Adelman 17th. 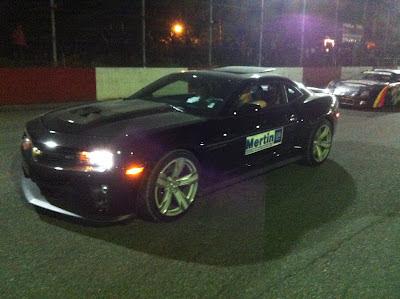 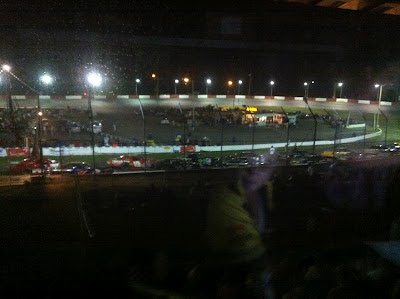 Thanks to all of the sportsman racers who came out to support the ARCA OK Tire Sportsman Series. The hard work and dedication from all racers, volunteers, and track workers is greatly appreciated. Thanks also to the fans of Agassiz Spoeedway and Mertin GM Performance parts. Come on out and see the WCSS in action on August 25th with the Hot August nights PIT STOP RACE in Vernon. Catch the ARCA OK Series Championship night on September 8th at Motoplex speedway in Vernon.
Posted by kendall at 12:22