Blue skies and hot temperatures were the setting for the OK Tire 100. Loyal fans lined the grandstand area to watch twenty one beautifully prepared cars race on the small, flat 3/8 track. Last practice times showed another very tight field. After the Canadian National Anthem, the five car of Bob Williams was slowly driven around the track by Lee Thomas in tribute to Lees' brother Bob, who had recently passed.  Bob was a dedicated crew member for many years.

Qualifying began with one of the largest fields of cars ever at the speedway. The usual hitters were laying down fast times, but Korbin Thomas was the fastest at a 15.065. The field was split into three heat races. The C heat was won by Scott Morgan in the 44 car. The B heat was taken by Dave Olson, with Warren Bergman close behind. The A heat was a great drive by Matt Stephenson, with Trevor Adelman and Logan Jewel pressuring.

Lining up the main event had all of the drivers paying attention to the brand new Lazy Boy from Ashley Furniture Quesnel, the big prize for the winner of the feature. A twelve car invert put . Dave Olson on the pole and Bob Williams on outside pole. The green is thrown and the race is on, everyone vying for position. Lap ten brings out the first caution with Korbin Thomas tangled up in traffic. Thomas heads for the back of the pack and Dave Olson continues to lead the race, Williams, Mayert, Cornett-Ching, and Matt Stephenson rounding out the top 5. Stephenson and Berrow make contact at lap 20. Yellow is out and both cars move to the back and the race continues. Everyone is driving flat out, and the 19 of Korbin

Thomas has began the long trip back to the front group. Every car is driving flat out. Back to green and the racing is fast and furious. The 71 of Olson continues to lead. A green flag run starts to stretch out. The 18 of Ian graham is looking real fast on the high side and passed bob Williams for the second position. Mayert and Jewel are all in the mix. A series of green laps and yellow laps alternate through the next 15 laps. As they say, cautions breed cautions. Thomas is the benefactor as he gains track position. The nose of Trevor Adelman's' car is dragging after a failed restart and his crew goes to work on pit road. The race is green again and the 18 of Graham and the 5 of Williams battle down the backstretch. The two touch and the 18 spins into turn three. The field misses him but the engine wont fire and the 18 goes down a lap. A long green run starts on lap 68 and Olson has another great restart. Williams followed close in second and Thomas has battled back to third. Racing is going on throughout the field and no one is giving an inch. The 74 of Dan Ursel has worked his way into the top 5. Bruce Bentley is running a solid 7th in his return to stock car racing. Berriau in the 27 is back into the pits with another tire problem. It's been a tough night for the defending champion. A long caution cools the tires and sets up a 13 lap sprint to the checkered. Olson still holding the top spot, Williams in second, and Thomas game on for the restart. Olson has another flawless restart and Thomas ducks low on the 5 and takes second. Not to be left out, the 92 of Jewel is tight to the bumper of Thomas and takes the third spot. Its a photo finish as Olson wins over Thomas with a .049 margin of victory. 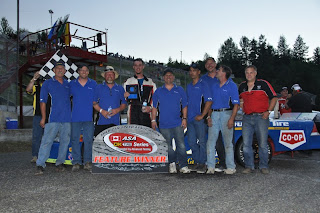 Photographs by April Sedlock
Posted by kendall at 22:39